‘Tis the season for the development of cyanobacterial surface blooms on Lake Winnipeg (and many other lakes). Recent satellite images (yesterday’s image is below) show a persistent bloom near Reindeer Island on the west side of the north basin and a newer bloom on the east side from Berens Island northward to the outflow of the lake. Surface blooms in the south basin and narrows are not as obvious as in the north, although Washow Bay has had a notably visible bloom come and go over the last week. There is also a small bloom developing north of Fisher Bay, near Jackhead.

Also of note – the south basin is becoming more turbid as the lake continues to mix – shown by the tan colour, which is due to suspended particles in the water column. These particles can block sunlight – one of the ingredients that algae need to grow – which is why the south basin generally has less extensive blooms than the north. Despite the promise of increasing turbidity, there are still areas of clear water (dark in colour) in both basins and the narrows – the makings are certainly there for a festive algal season.

Reminder – I post satellite images more often than I blog. Please visit the Image Galleries tab above to view a more complete collection of images. 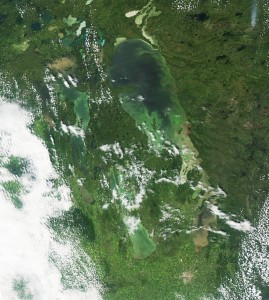