In 2016, the LWRC launched a second vessel, M/V Fylgja, a 12.8 m touring boat donated by the Nielsen family. This new vessel was fully converted to the requirements of a research vessel including full galley, berths, sanitation system for multi-day tripping, safety, electrical, navigation systems and Transport Canada certifications. With a mere one metre draft, M/V Fylgja complements the MV Namao‘s offshore capabilities by further facilitating special projects in the nearshore of the south basin and narrows of Lake Winnipeg. 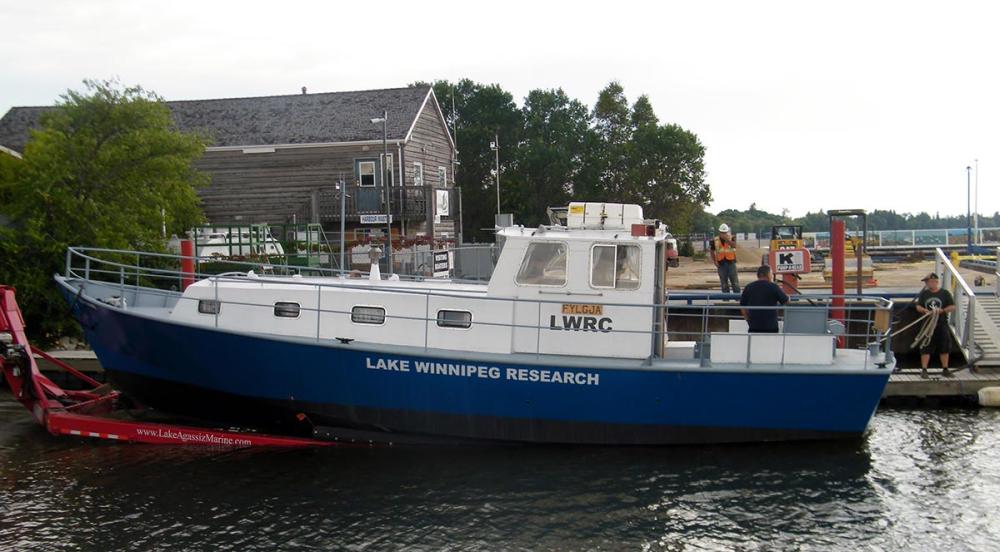 The Motor Vessel Fylgja was originally built in Riverton by Alec Zagozewski in 1973/74 during the same time as the M/V Namao. In 2013, the Fylgja was offered to the LWRC as a charitable donation from Barbara and Jens Nielsen in 2013.  She is now owned and operated solely by the LWRC as its nearshore research vessel.

Alec Zagozewski and Jens Nielsen designed her lines based on the whitefish boats used by Icelandic fishermen on Lake Winnipeg. Her keel was laid in Joe Zagozewski’s shed in Riverton 1973 and was formally launched in the fall of 1974. She was then motored to Buchanan’s Marina in Winnipeg where the Nielsen’s spent years improving her for family cruising and lengthy holidays on the Lake.

A relatively shallow draft with ample deck space made her an exceptional boat for the Nielsen’s to the explore bays, rivers and islands of the Lake on their annual summer holidays. Their first summer was spent exploring the marshes and expansive beaches of the Red River delta. Then they began to venture north and explored Black Island, Deer Island, Grindstone Peninsula, Rice River and Granite Quarry. The summers of the 80s, 90s and early 2000s found the Fylgja north of The Narrows towards Matheson Island, Black Bear Island, Princess Harbour, Bradbury River, Catfish Creek, Jack Head, Berens Island, MacBeth Point, and the Pigeon River.

The Fylgja gave the Nielsen’s a unique opportunity to see the contrasts in geology, flora and fauna between the Lake’s two shores: the east’s Canadian Shield and the west’s Interior Plains and silts/clays of former Lake Agassiz. They also witnessed the return of the American White Pelican, the Bald Eagle and the Osprey after DDT’s ban in 1972. Observing and photographing Turkey Vultures, Black Bears, Coyotes, Moose, Wolves, Northern Lights and limestone fossils were all highlights of their cruising holidays.

The increase in cyanobacterial blooms on the Lake became a growing concern in the 1990s. The impact on recreation, the Icelandic and First Nation’s communities and the Lake’s eco-system prompted the Nielsen’s to donate the Fylgja to the Research Consortium in 2013.

With a shallow draft, the M/V Fylgja is particularly well suited for nearshore work. A timely acquisition since it coincides with the arrival of zebra mussels, an aquatic invasive species that will initially have the greatest impact in the nearshore area. She will serve as a valuable complement to the M/V Namao’s offshore capabilities.