September 3rd – worth a closer look 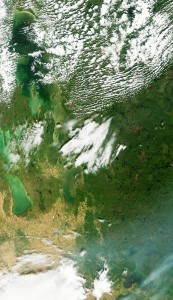 At first glance, this image doesn’t look like much but it’s worth a closer look. I included Lake of the Woods because there appears to be a sizeable surface bloom there. The south basin of Lake Winnipeg is particularly interesting — again, a considerable bloom is present, especially visible in the southern portion near the mouth of the Red River. In that area, you can also see clearer water along the southern edge of the bloom. The lake appears to be quite turbid northeast of Victoria Beach, and the Winnipeg River plume with its high dissolved organic carbon is also visible as it mixes with the turbid water in the bay. The narrows region is obscured by clouds, as is some of the north basin. Nevertheless, if you zoom in, it looks like a small bloom is present near Limestone Point — given the clear water in the vicinity, this ‘little’ bloom could become a big one. There also seems to be a lot of clay being eroded from the north shore and making its way into Playgreen Lake. Overall, this image nicely illustrates how heterogeneous Lake Winnipeg can be.