September 15th – clear skies reveal a not so clear lake 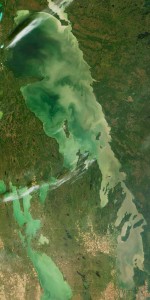 The persistent high winds over the last week appear to be mixing the lake quite effectively. Consequently, the water looks increasingly turbid in most areas of the lake. The plume of suspended clay originating from the north shore now extends further into the lake before exiting via Two-Mile Channel and Warren’s Landing. It is difficult to see amidst the swirls of suspended sediment in the north, but there does appear to be a surface bloom near the north shore of Limestone Point and offshore in the central part of the basin. I suspect the higher turbidity will curtail further development of this bloom, with perhaps the exception of the area northeast of Grand Rapids where some clear water remains. In the south basin and narrows, small patches of surface blooms persist despite the winds, but generally, the water appears very turbid due to the suspended sediment. Thus, it is not likely that extensive new blooms will form under these conditions. (Click on the image for a closer look.)