Nutrients alone do not an algal bloom make

We have had some clear satellite imagery as of late. Below is the image from August 14th – the rest are in the Image Gallery. I encourage you to scroll through the collection to see the development of this summer’s blooms (after reading this post, of course.)

The satellite image below shows an extensive surface bloom in the north basin, confined largely to the area north of Sturgeon Bay and Berens River, but starting to extend south to Fisher Bay and Bloodvein. According to early results from Hedy Kling (Algal Taxonomy & Ecology Inc.), the composition of the north basin algal community varied spatially during the summer research survey. The bloom on the east side was dominated by cyanobacteria (aka blue-greens), notably Dolichospermum species (formerly Anabaena) with a low abundance of Aphanizomenon flos-aquae complex. The Dolichospermum also contained a lot of heterocysts (specialized structures that  allow the cells to carry out nitrogen fixation) indicating nitrogen limiting conditions in that area of the lake. Conversely,  there were few cyanobacteria on the western side near the Saskatchewan River, and instead the community was dominated by a number of different diatom species. Areas in the centre of the north basin had comparatively little algae at the time of sampling (late July) but this has since changed, based on the satellite imagery. It is anticipated that the composition of the north basin algal community will continue to change as the summer progresses, and it will likely become dominated by Aphanizomenon species – they like it hot.

If you look closely, there is a small surface bloom in the south basin. Although insignificant compared to the north, the potential for this minor surface bloom to develop further is high for a number of reasons. The first is nutrients – needless to say, Lake Winnipeg generally has plenty of nutrients, which serve as food for algae. (I say “generally” because nutrients can be limiting in Lake Winnipeg, like nitrogen and silica – a topic for another post.) However, nutrients alone do not an algal bloom make – algae also need light. The darker patches in the south represent clear water, or at least clearer than the tan-coloured areas, which have more floating particles. Clear water allows greater light penetration, thus, it is in these darker (clearer) areas that one would expect the existing small blooms to continue growing. Lastly is the weather  – notably hot and calm – although today is windy, which will certainly stir things up quite a bit. Generally, good beach weather for us means good blooming weather for cyanobacteria. Calm conditions also allow the larger particulate material to settle out rendering the water clearer, which can further contribute to favourable bloom-forming conditions.

Although persistent high winds and cooler weather could change the outlook, it appears that we currently have the key ingredients for the development of considerable cyanobacterial blooms in the south basin and continued development in the north. 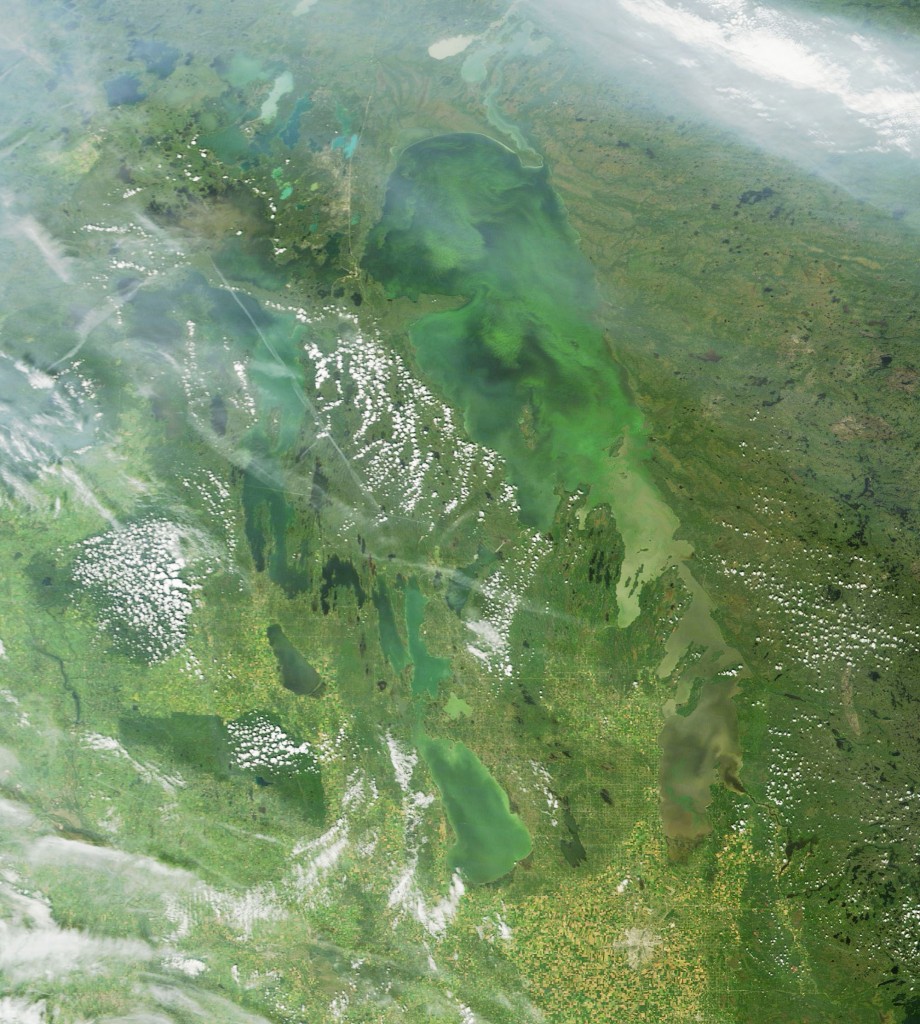