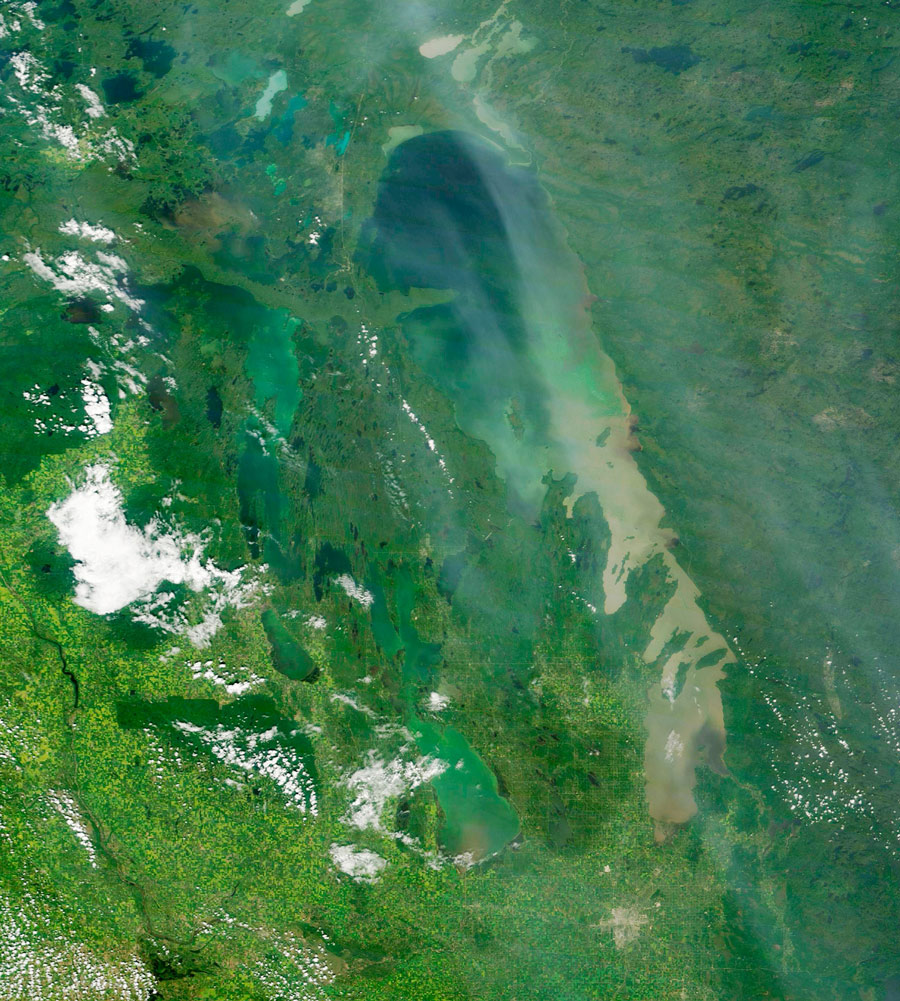 First post of the field season – and yes, a little late, I know. I have myself and zebra mussels to blame for that – another story, perhaps for another day. Despite my negligence in the writing part of the blog, I do tend to keep up with the imagery. So if the urge to view Lake Winnipeg from space strikes you at any time, simply visit the Image Gallery. If nothing else, check out the July 3 image – a veritable work of art. Below is an image from July 30th – unfortunately a bit hazy but still revealing. Noteworthy is an obvious surface bloom forming on the east side of the north basin (north of Berens Island). If these hot, relatively calm conditions persist, one would expect this bloom to get larger wherever the water clarity is sufficient to support photosynthesis. Also of note – if you zoom into the image, there are hints of surface algal growth in the narrows and south basin.

Given the higher turbidity* in these areas, the weather will play a particularly important role in determining the extent to which these patches develop into blooms in the next little while. In the south basin of Lake Winnipeg, water clarity is generally the limiting factor for algal growth – lots of nutrients but not enough light. Calm conditions can result in clearer water (less turbid is perhaps more accurate for the south basin) because particles can settle out of the water column and there is less re-suspension of bottom sediments. Add some hot, sunny days to the mix and you may have the makings of a surface bloom, likely dominated by cyanobacteria (aka the infamous blue-greens), who like it hot but not turbulent. Last I checked, the long weekend forecast was hot and calm – this should please both humans and blue-greens alike. *Turbidity – suspended (inorganic) particles in the water have a tan colour in the image. The dark brown colour is due to dissolved organic carbon (DOC) – similar to a cup of tea – coloured but with no particles floating around. Many of the eastern rivers contain high levels of DOC – especially visible near the mouth of the Winnipeg River, albeit somewhat diffuse due to mixing with lake water.