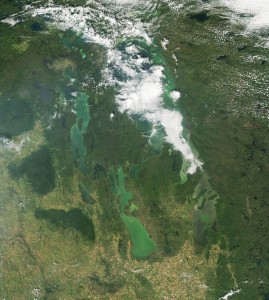 August 28 – click on the image for a larger view

I was hoping to post a clear image of the entire lake before the long weekend but the best I can do is from August 28. The north basin is largely obscured by cloud, although one can still see a surface bloom all along the eastern shore.  Another surface bloom is clearly visible in Fisher Bay, and perhaps of most interest to beach-goers is the bloom in the central south basin off Victoria Beach. Hedy Kling (Algal Taxonomy and Ecology Inc.) recently examined samples from this area and sent a few images for your viewing enjoyment (below). Samples were collected by Hannah, an enthusiastic soon-to-be grade 8 student who started her science fair project early this year!

Based on these recent samples, Hedy found that cyanobacteria (aka blue-greens) currently comprise the algal community in the Victoria Beach area. More specifically, the bloom is dominated by Aphanizomenon flos-aquae complex, with three species of Microcystis and some Pseudanabaena* also present. Noteworthy is that all of them have the ability to produce toxins. I do not have any toxin data from this bloom to share; however, based on the Provincial dataset for microcystin-LR (an algal toxin), levels in Lake Winnipeg algal blooms are generally well below the recreational water quality guideline in inshore samples, and usually below detection in offshore samples. Nevertheless, just as one doesn’t snack on wild mushrooms during a casual walk in the forest, or play with unidentified snakes, one shouldn’t swim in a blue-green algal bloom – just in case…

*Before I sign off to enjoy the long weekend, I would like to add that it was Hedy who first described Pseudanabeana rutilis-viridis as a new cyanobacterial species – and the samples were from, you guessed it, Lake Winnipeg. Click on her images below for a closer look. 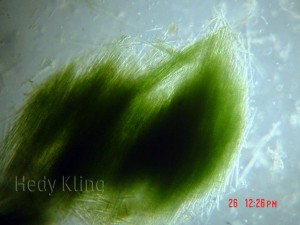 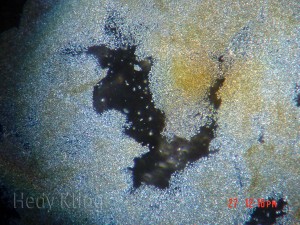 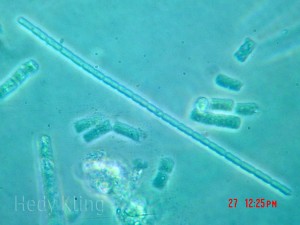