Blue-greens in the Red – getting ready for winter

It has been a long time since the last post. This is primarily due to the unusually cloudy conditions as of late – since October 1st, there was one lonely satellite image that was clear enough to download and process – it is in the 2012 archive if you wish to view it. (While there, check out the new ‘Students’ gallery.) All the while, the Science and Education Programs on the lake wrapped up for another  season, the research vessel Namao has been shut down for the winter, and ice is starting to form on the rivers and shallow bays. And we mustn’t forget – the akinetes are forming! 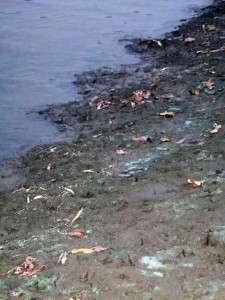 Decaying algal cells on the bank of the Red River in Winnipeg. (R. Brynjolson)

In early November, I was contacted by local artist, Rhian Brynjolson, who was wondering about some blue-green algae along the banks of the Red River.

Intrigued, I asked her to get a sample, which she somehow managed to do despite the waist deep mud. Algal taxonomist, Hedy Kling, kindly took a look at the sample and found a variety of blue-greens (cyanobacteria) including Aphanizomenon flos aqua (dominant in the sample but decaying), Microcystis (a rare occurrence), and Aphanocapsa holsatica. Hedy also noted an abundance of akinetes, or dormant/resting-state cells. She believes that a dying algal bloom came down either the Assiniboine or Red River and was well on its way to settling on the bottom of the river when the water levels went down (thereby revealing it to the passing artist). Perhaps most interesting is that if the akinetes survive the winter, they could provide the ‘seed’ for some of next year’s blooms in the lake. Click on the images for a larger view. 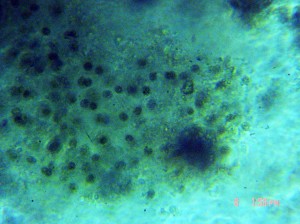 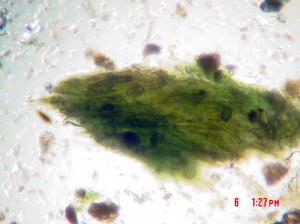