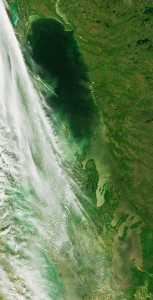 This image is the first in over a week where the lake is not obscured by clouds. The algal blooms in the south basin are less obvious than they have been, but still present. Algae advisories have been issued by the Province for Hillside, Victoria (Red Cross Dock) and West Grand beaches and at the lagoon at West Grand Beach. The water in the south basin remains fairly clear despite its natural turbidity so it is probable that the blooms will persist in this basin. There are no extensive pelagic blooms in the north basin yet but some evidence that they are forming near-shore on the east and west shores. The plumes of the east side rivers with their high DOC (dissolved organic carbon, which imparts a dark brown colour), are now more noticeable too. Click on the image for a larger view.