A stunning satellite image to start the season

I was going to start this season’s blog with a comparison of images to show how late ice-out was this year compared to previous years. However, upon closer examination of the images from this spring (which are all in the satellite image gallery by the way), there appears to be something else that deserves mention. The satellite image below – absolutely stunning I might add – was taken on June 2, not long after the north basin became ice free. It shows a very heterogeneous lake, as is often the case at this time of year as the inflowing rivers mix and begin to influence the water clarity of the lake. What caught my eye (in addition to the amazing mixing that is taking place) was the apparent diatom bloom in the north, from about Dauphin Bay to the central north basin and outflow at Warren Landing. (Diatoms are a group of algae that are an important source of food for invertebrates, which in turn support higher organisms like the forage fish community.)

This bloom appears to be quite extensive and persistent even after ice-out. The first evidence of this bloom was at the outflow in mid-May when the north basin was still frozen, which suggests that it started to form under the ice. Under ice diatom growth is not unusual especially in years when there is not much snow, thereby allowing light to penetrate through the ice and support photosynthesis. Early results from Hedy Kling (the authority on Lake Winnipeg algae) show this year’s south basin algal community made up almost entirely of diatoms – primarily Aulacoseira icelandica – with some green algae (also a good source of food) – see Hedy’s images below. North basin samples are being collected this week off the Namao so it will not be long before we know which species comprise the north basin bloom; Hedy is putting her money on A. icelandica.

The ultimate fate of this bloom is important. The assumption of many, especially the media, is that if there is an algal bloom, it will decompose, use up oxygen, and suffocate the animals that live in the lake – hence the terms ‘choking’ and ‘dying’. Low oxygen events have been measured in Lake Winnipeg, but very rarely and they do not persist, at least based on the data that we have – this is largely due to the fact that Lake Winnipeg is an extremely shallow and, therefore, well mixed system. A more likely fate, especially for spring diatoms, is being consumed by invertebrates such as zooplankton (small, floating animals) and benthos (the animals that live in the sediment at the bottom of the lake) since diatoms are an excellent source of food. Interestingly, the weather can also play a role in both the growth of algae and its fate – windy conditions can hamper the growth of surface blooms and effectively mix the lake, while warm, calm conditions can do the opposite. Updates on the bloom will follow – in the meantime, click on the images below for a larger view of this wonderfully dynamic and complex system. 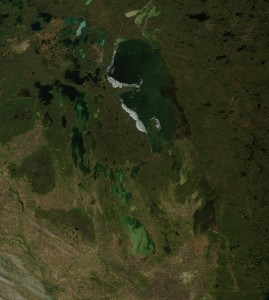 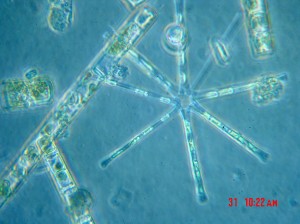 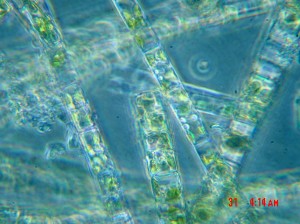