News From the LWRC's Programs

UPDATE on the 2020 Field Season

Spring Research Survey – cancelled due to measures associated with Covid-19. Summer and Fall Surveys – to be determined. 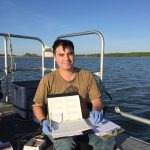 The scholarship will be used to cover the cost of the open access fee for one of Matt’s publications in the journal Ecology and Evolution.

The Journal of Great Lakes Research (JGLR) is the official journal of the International Association of Great Lakes Research (IAGLR), devoted to research on large lakes of the world and their watersheds. The LWRC’s Science Program is working with the IAGLR editors – Drs. Bob Hecky and Stephanie Guildford – on another Special Issue for Lake Winnipeg.

If you would like to contribute to this Special Issue, please visit the journal’s homepage where you will find links to both the Manuscript Submission Site and Guide for Authors. When submitting manuscripts, please select the article type “SI: Lake Winnipeg 2020”. https://www.journals.elsevier.com/journal-of-great-lakes-research

We are pleased that a record 760 people toured the ship in just three hours at our Open House on board the Motor Vessel Namao on the Canada Day long weekend. 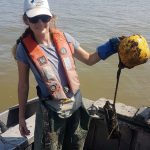 The LWRC offered two scholarships in 2018–2019. Nicole Turner is a graduate student at Lakehead University, studying under Dr. Michael Rennie. Nicole’s thesis is focused on evaluating movement patterns of walleye in Lake Winnipeg by using previously unpublished provincial tagging and fisheries-based recapture data from the 1950s and 1970s, as well as current data derived from an acoustic telemetry study conducted by scientists from the Department of Fisheries and Oceans. Combined, these datasets will help Nicole evaluate historical rates of exchange between north and south basin walleye, differences in movement rates between dwarf and normal walleye strains, and temporal changes in distribution ranges of walleye. Ultimately, assessing temporal changes and contemporary movement patterns of walleye will help inform current fisheries management practices in Lake Winnipeg.

Rachel Mandryk is an undergraduate student at the University of Manitoba, studying under Dr. Tim Papakyriaku.The objectives of Rachel’s research include (1) constructing a methane budget by estimating the air-sea methane fluxes during the ice-free season; (2) quantifying where the methane is originating from, whether it is of pelagic, littoral or benthic origin; and (3) identifying relationships between methane concentrations and other factors such as the extent of anoxic conditions and the presence of methanogenic organisms, among others. Methane is an important greenhouse gas. 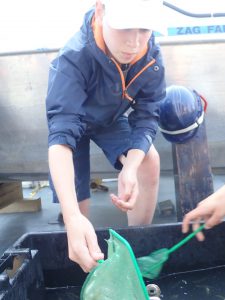 Thomas sorting forage fish on board the Namao.

Thomas Gale, grade 7, was the 2019 recipient of the LWRC’s Water Award for his outstanding project called “Microplastics: can washing a blanket pollute the environment?”. He were honoured to have Thomas come aboard M/V Namao twice this summer–first was to share his project to the general public during our Open House, and then as part of the science team for a half day. Congratulations Thomas for an excellent project. 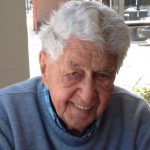 It is with sadness that we announce the passing of Dr. Herb Lawler, founding Director of the Lake Winnipeg Research Consortium (LWRC). Between 1950 and 1988, Herb had an impressive career with Fisheries and Oceans Canada, including an appointment as Director General for the Central and Arctic Region in Winnipeg and acting Assistant Deputy Minister in Ottawa.  In his retirement, Herb was actively involved in the founding of the LWRC and served on its board until his passing.  In recognition of Herb’s important contributions to the LWRC and Lake Winnipeg, the LWRC’s graduate student scholarship will be re-named the Herb Lawler Memorial Scholarship. Herb is greatly missed. 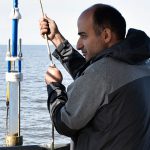 The Scholarship recipient was Masoud Goharrokhi, Ph.D student at the University of Manitoba. Masoud’s research involved using “sediment fingerprinting” to determine the sources and movement of suspended sediment within Lake Winnipeg – including erosion, tributary inflows, and resuspension. 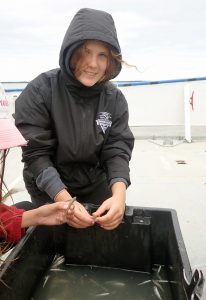 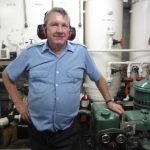 On August 14th, 2017, a family ceremony took place on board M.V. Namao to release Dan’s ashes into Lake Winnipeg. Dan’s passion for ships, and especially ship’s engines, resulted in a 35-year career with the Canadian Coast Guard, followed by a “retirement” in the engine room of the M.V. Namao as Chief Engineer, as well as Superintendent of Marine Operations, for the LWRC. Dan is greatly missed by the staff, science group and crew of the M/V Namao.